According to the following projection (statista), the estimated number of mobile users in 2019 will be around 5 billion.

Software applications therefore have to be designed to handle requests from a large number of devices.

The amount of data being requested is also large due to video, audio, apps and the like. In 2018, in average users will watch 20 hours of video per month, listen to 10 hours of audio, make 11 video calls and download 20 apps.

The limit to meeting this demand however is not hardware but how we construct software systems: the OS and required applications.

This limit is related to the C10K problem. (The increasing rise in demand means that we are now having to consider the C10M problem).

The C10K problem, refers to the inability of a server to scale beyond 10,000 concurrent connections/clients due to resource exhaustion.

This is not just about response speed or requests per second (performance), but also about having the ability to handle a large number of multiple separate requests in a timely manner (scalability).

We solve this, partially, by providing web servers that are capable of handling many clients, through server socket optimisation and event driven techniques.

Servers that employ the thread-per-client model, can be confounded when pooled threads spend too much time waiting on blocking operations, usually I/O.

To assign the incoming packet to the correct thread, the OS employs a nonlinear thread search algorithm (O[n^2]) rather than constant time look up (epoll(), IOCompletionPort). This gets markedly slower with each increase in the number of threads.

Threads use up both memory (~1MB of memory per thread for stack) and CPU time (context switching).

As a result, blocking operations hamper scalability both by exhausting a server's memory and its CPU.

Performance and scalability are different concerns. The issue is scale rather than speed.

Increasing memory or cpu doesn’t solve the scalability issue. Although the performance initially increases, at a critical number of connections, it degrades sharply. The following graphs are from Robert Grahams blog Scalability: it's the question that drives us. 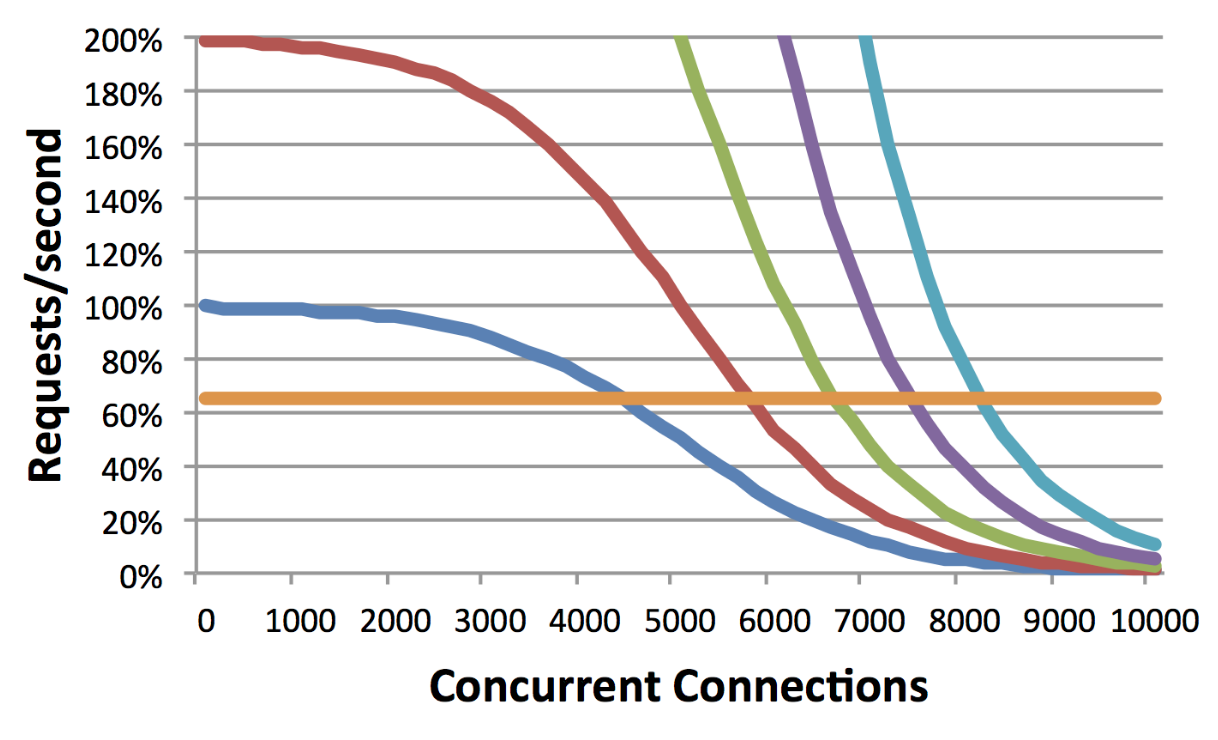 Doubling the server speed shows that performance has increased but at the limit of concurrent requests it degrades and does not scale.

Vertical scaling, that is, adding more CPU, RAM, HD is limited and expensive. Horizontal scaling is cheaper as commodity hardware can suffice. Although you need to be aware of the CAP theorem limitations.

Reactive software, in essence makes use of non-blocking asynchronous request handling and is designed to be scaleable (elastic), resilient and responsive (low latency).

Many use the Reactor pattern for reactive systems and is based on event polling, a dispatcher and message handlers.

These process requests through a single thread in an event loop, and absolve the coder from concerns about synchronisation. You do need to ensure that the event loop itself is not blocked. Any blocking calls should be spawned off in a new controlled thread, or replaced with non-blocking versions.

WebFlux, Spring Framework 5. Can be served by Netty, Undertow etc.
Includes the concept of backpressure, through reactive streams, which is a mechanism to make sure producers do not flood consumers.

Vertx is a java library that uses an event loop built on the netty library. Vertx includes an in-memory data grid tailored to allow messaging, the event bus. An interesting feature allows making use of multi-cores chips easily by setting -Dvertx.options.eventLoopPoolSize={number of cores}.

Written in C++, uses libenv for the event loop algorithm. Based on Google's V8 JS engine which also written in C++. Multicore utilisation is possible through a cluster module but you have to write code to make use of it.

Comparison of Event Based and Thread Based Servers

The java based application resource usages were measured using VisualVM

The examples were run on MacOS High Sierra with a 2.4 GHz Intel Core 2 Duo and 8GB memory. The comparison is useful in as much it highlights the relative resource usage. The file descriptor limit needs increasing for the test eg
ulimit -S -n 1200 on the terminal running ab. 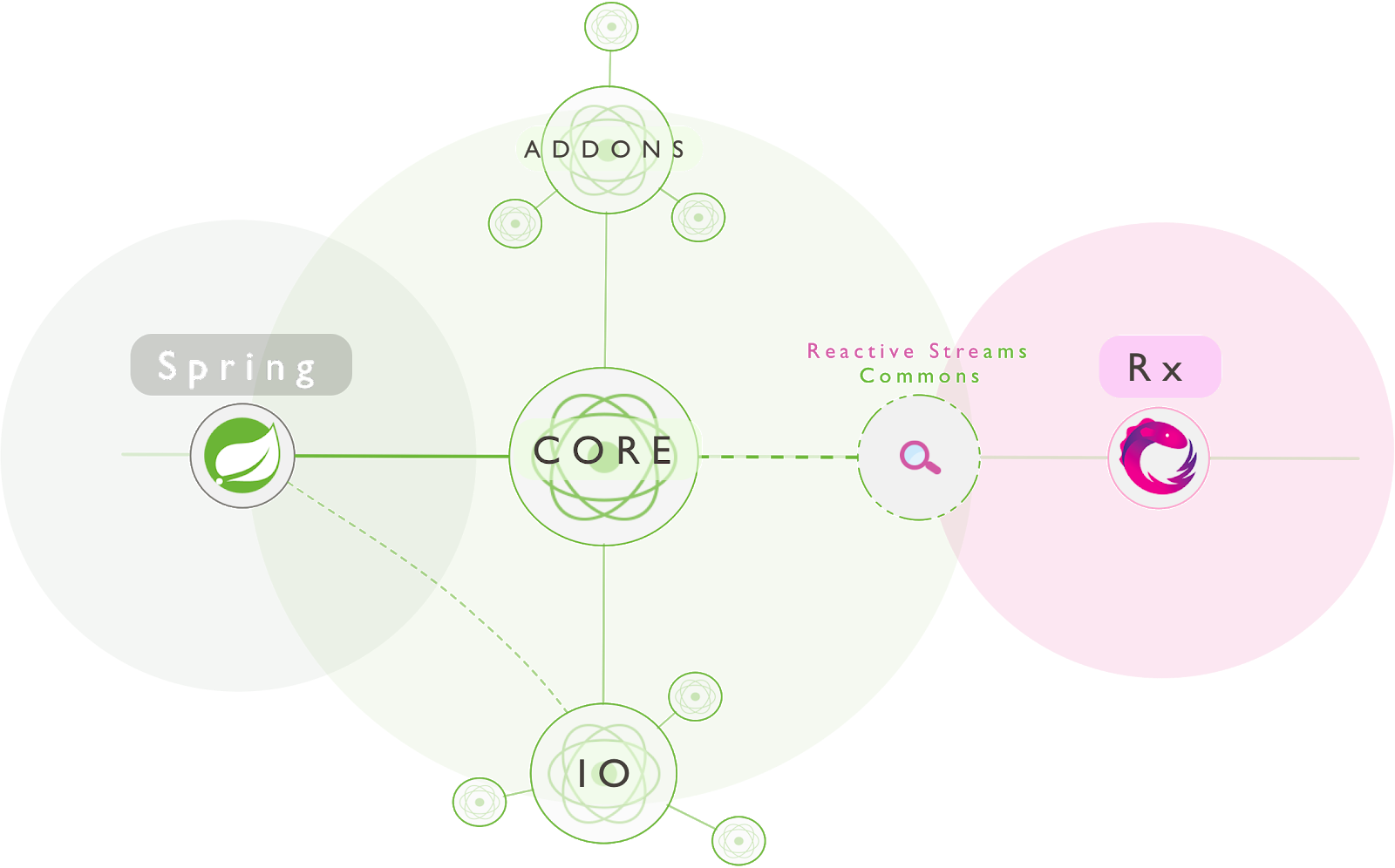 This is a very simple REST service with a main thread delay to simulate a blocking call, obviously in a normal design we would avoid this and use an asynchrous version with a callback handler. Creating new threads for blocking calls would end up having the same problems describe above. 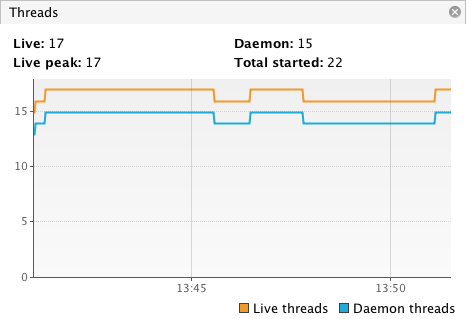 There is a small rise in memory, no rise in threads. The requests are queued in the OS due to event loop processing, hence the need for appropriately sized file descriptors (ulimit -S -n).

A similar very simple REST code with the thread based jetty server. 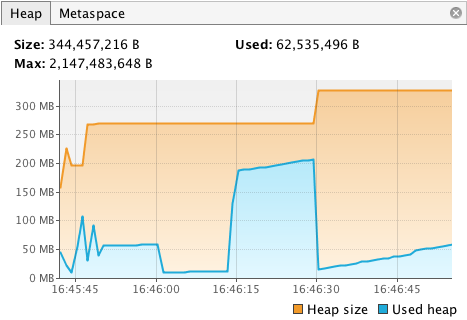 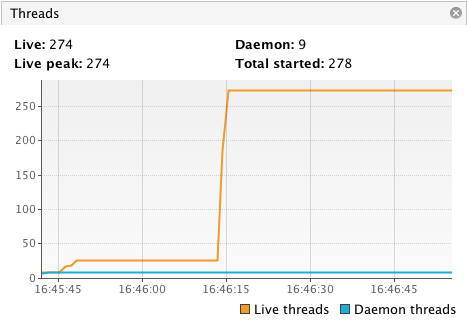 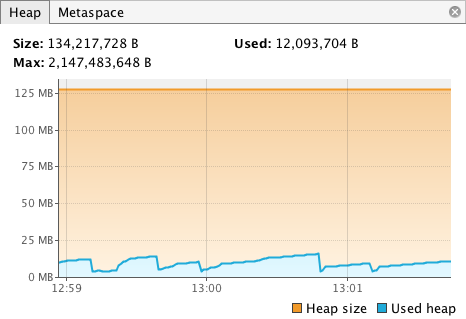 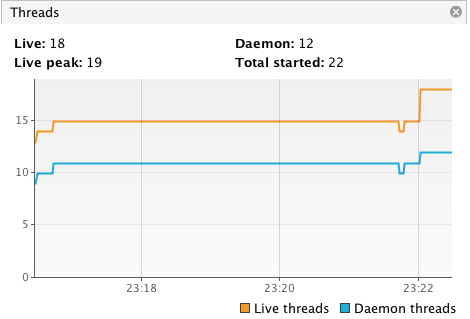 Again the event loop architecture processes one request at a time which is why you either need to spawn off a new thread or use non-blocking calls.

For a 2 core machine you may wish to try:
java -jar -Dvertx.options.eventLoopPoolSize=2 target/vertx-demo-1.0-SNAPSHOT-fat.jar 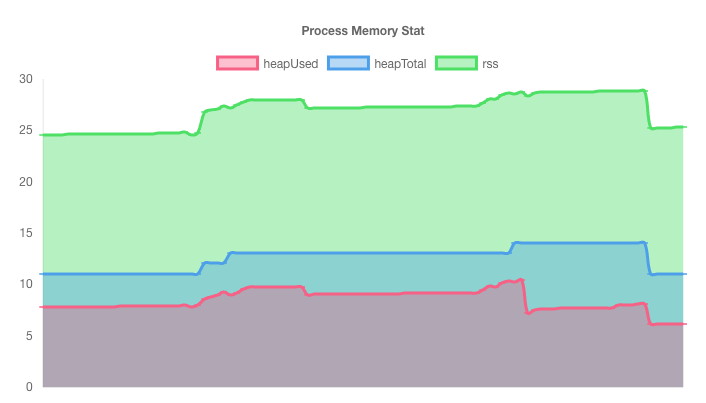 
Observe the comparatively higher memory requirement of the Jetty based service, where the thread capacity needs careful handling to manage requests.

The source code for this comparison can be found at https://gitlab.com/reactive-comparison

Stay up to date! Get all the latest & greatest posts delivered straight to your inbox

Read more posts by this author.

Simple Knative Eventing in Kubernetes with a Java Listener and Sender

Kafka in Kubernetes with Spring